63 replies to this topic 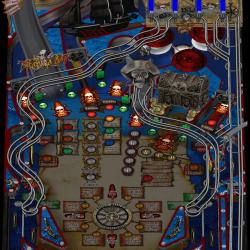 This table was inspired by Stern's POTC. It has a similar layout and similar rules.
All the graphics, sounds and music are original. The music was composed by Adrian von Ziegler.

The main difference in the layout is that this table do not hace any holes or saucers, so the ball is always moving.
The script follows a little the POTC rules, but they are different, so take a look a the manual.

The table doesn't use flashers or big alpha ramps, and the main goal I had in my mind was to make a script I was happy with, and I succeeded. I guess I could have been working a few months more on the table to add all kinds of lights and flasher effects, DMD with animations and other things and rules. About the script: there may be errors in the logic, I'm not a programmer, so there may be errors

Well, read the manual, so you learn the differences from this table to Stern's POTC and have fun!

sast05 has made many script changes.
He has added all kind of checks, bug fixes, rewrote some subs and create new subs to assure all the modes, sounds, and everything works as explained in the pdf. He did all this to learn how to script a VP table. My hat's off and welcome sast05 as a new author

The rules are same as I wrote, but he fixed all the bugs I managed to made and added many things to make the table work like a real one. He even added a special sub to queue all the pirates quotes so they aren't played on top of each other. He also added more Annie quotes and added better quality music using mp3. I prefer to have the music in the table, but I must agree that it sounds much better as mp3 So just copy the mp3 files to the VP's Music folder.

I have tried to resume all the changes but there are too many of them.

First I should like to thanks DeeGor for showing me the error in the analog plunger sub. I managed to copy an older version of the sub

Now some of the changes by sast05. I can't remember all of them, but here are at least some of the last ones

And many more bug fixes. I'll just copy/paste the last two list of fixes, so you get the idea of the work involed :

1. Outlane ball saves are completely independent of extra balls and timed ballsavers (just like a kickback).
2. All scoring and advancement of Port Royal Lights are disabled if the ball is trapped by the left or right flipper.
3. Once 4 Winds Multiball has been played, you need only complete one of each pair of NSEW tasks to light a steering Wheel Compass Point. The incompleted tasks then become optional.
4. Treasure awards were being skipped over when 5 treasures were added. Changed the code so Extra Ball and Bonus Held were awarded if an Award Level was passed.
5. Added playtesting code and a droppable wall between the flippers to help troubleshoot the table (this has been removed from the table ).
6 .Added a playtesting routine to help time the sample durations.
7. Added flashing arrows mode. After Wheel is completed, shoot the liar's dice lane to start the mode. All Pirate arrows flash. Shoot all the flashing lanes to start 4 Winds Mulitball. Best to fill the rotating disk with balls before starting the mode. When the mode is started, all balls are released from the Port Royal disk.
8. Added Option to skip the Flashing Arrows Mode. (Keep the old rule in place)
9. User defined variable "MaxBalls", Limits total # of balls on playfield to value of variable. If value too high, gameplay is too easy and Activity is just too frenzied and insane.
10. Added Flashing G-O-L-D letters to indicate SuperJackPot available in the Treasure lane.
11. Letting Ball sit in shooter lane too long, causes Annie to say, "Either shoot the ball or walk the plank".
12. Added extra Annie instruction when first game started. "Shoot the hole for a skillshot". Annie does not repeat this phrase again.
13. To Complete the green pirate skulls, you must do it twice. First time makes lights all flash, second time lights go solid to complete task. >From then on you need only complete them once (solid) to enable liar's dice.
14. Nasty bug, balls would bunch up and get stuck in the shooter lane if "multiball" balls and "extraball/ballsaver" balls were being plunged at the same time. Fixed the code so Multiball plunges would wait until extraball/ballsaver plunges were complete, or have extraball/ballsaver plunges wait until all balls from multiball were plunged first.
15. Super Skillshot was not possible to complete with existing code. Had to change:

16. Drain routine changed substantially because of logic fixes.
17. Added TF (correction factor) to samples because there may be differences in different computers. If sounds run into each other, just increase the value of TF.
18. Sound queue system added, so Annie and Pirate voice samples won't run into or conflict with one another. All other sounds are played simultaneously with the "talk". Samples removed from scoreboard queue, so you don't have sounds in a queue moved to another queue.
19. Pirates quotes are only added to queue if the queue drops to zero and the last sample completes. As balls on the playfield increase the choice of quotes, become more limited to shorter and shorter quotes.
20. Added missing Annie quote "Careful" to tilt routine.
21. PortRoyal Locked balls added, just after switch hit, best to update count immediately.
22. Fixed nasty combo bug. If another combo started before present combo completed, the pirate arrow would be left flashing and never go back to solid state.
23. NSEW lamps were going on before both tasks were completed for the NSEW direction. Reworked the logic so this would not happen.
24. Fixed logic so if an extra ball followed a ballsaver during game play, the extra ball would remain lit after a drain.
25. Added functionality of "shoot again" lamp for extra ball.
26. Several tasks on wheel turned to flashing when task first started, Sword hits with bumpers flash the steering wheel task lamp.
27. Several lamps on the table were not functioning. Added logic to make the following lamps work.
1) Attack Port Royal and Tortuga Multiball lamps (Ball lock lamp flashes when either lit)
2) Red Gold Multiball lamp- Flashes when G-MB available, solid when started.
3) Awards flashing arrow lamp- Used for new flashing arrows mode.
28. Gold Multiball only allowed once, before 4 winds. 5 million awarded in lieu of opening chest after G-MB completed.
29. Port Royal not classified as a Multiball Mode, simplifying logic.
30. Kraken multiball not started if another multiball has started already, you still fight Kraken with existing MB.
31. Other awards given in Liar's dice if another multiball is already started.
32. First (and only first time) you shoot the black hole, Annie says "You found the black hole".
33. Several messages were missing from the scoreboard. Added messages for Sword Fight, Treasures, Bonus Held etc. Several messages were displayed for too short a time for your eyes to catch them. Changed a lot of "500" duration messages to "1000".
34. After a billion points, ball count would be truncated from the screen and logic for adding comma's above 1 billion points was not present. Reworked the code for "comma" support, removed the letters B-a-l-l from the scoreboard when points exceed 999,999,999. Now scoreboard is good for 999,999,999,999 points!
35. Added several Annie Sound Samples, I thought were missing and necessary. I you like any of them, I would substitute your own samples, as I haven't quite got the quality perfected yet.
36. I've probably forgotten a few things, you will just have to check the script for every last change.

1) Fixed logic for Tortuga when ball hits the drain, have logic for all conditions with Balls on Playfield & PortRoyalLockedBalls Combinations.
2) Added delays so multiball plunges don't conflict with extraball/ballsaver plunges and cause jam-ups in the shooter lane
3) Added logic so when multiple balls drain at the same time with a ballsaver or extra ball, a reduced count of zero will not trigger the next ball or game over.
4) Added logic and Timer so any balls that enter the disk at the same time other balls are exiting, will exit also without reducing the ballsonplayfield count. Also prevents a situation where you have locked balls and no balls left on playfield. This one was a real headache for awhile.
5) Added logic so theme music only changes once on a plunge. (would change again after an unsuccessful weak plunge came back to plunger, and you shot again)

1) Timed all Pirates Talk and made adjustments to each quote's time duration. Should speed up the queue.
2) Added variable TF so adjustment can be made if sound quotes run into each other on another computer.
3) Added Annie Quote "Treasure Award"
4) Added Annie Quote "Bonus Is Held"
5) Added Annie Quote "Ball Savers Are Lit"
6) Fixed up other Annie Quotes, trimmed and adjusted volume with "Audacity"
7) Updated Musics, for all repeating theme music, using mp3s to enhance quality, and take up less space.
8) Went to You Tube and resampled all theme musics, now in 44,000 Hz HQ Stereo HQ (Audacity)
9) Added more music from Adrian Von Ziegler, special music for Tortuga Multiball, an intense piece for 4 Winds Multiball, a gentle endtheme, and more in-game themes.
(All music is by Adrian Von Ziegler, no other artists)

I guess this is the final version of the table, and, Of course, I have removed the test debugg keys, hey no cheating here!

I can't wait to see sast05 first solo table Seeing the level of his fixes, whatever the theme, it is going to be great!

My finished Tables all them available here.

Thank you so much JP! Wonderful day this is

Can't wait this week-end to test, congrats in advance

Awesome! Thanks so much JP!!!

Thanks for this release JP! I will check it out when I get home first thing tomorrow!

Seriously I checked your WIP page today and had convinced myself this was months away. Cheers for the upload JP, am downloading now....

Didn't "sea" this coming! Arrgh. Thanks! Can't wait to try it.

Backglasses- Over 255 Remastered in Hires

I really love these surprise releases !

**Each pinball machine is a tiny universe... that we control.**


JP! You've Done It Again!
Looks Fantastic!
Can't wait to play it
Thanks SOOOO MUCH!

Monarch Of The Sea

I don't mind being called a PINHEAD!
I'd rather have a bottle in front of me, than a frontal lobotomy!

Wow this looks and plays great JP. I can't wait to get further in the game.
I am loading it on my cab now and need a backglass. Did you make a backglass for this piece of art?

Man, this table rocks. The PF is beautiful as is the music and sound effects! I wonder if we can move the DMD for 3 screen cabs? Seriously a piece of art JP!!

Love your work and appreciate all you do on this forum.

Thank you JP for another great table. I love the graphics, sounds and the incredible music. Thanks to all involved with this table.

Also the instructions with the screen shots is a nice touch.

I just wish it was more than one player only. Same goes for your awesome spider man table. I usually play with a few friends and would have loved to have a multiplayer option. But I'm not complaining. It's an awesome table regardless.

Thanks for all that you do.