Sindbad
View other files from this member 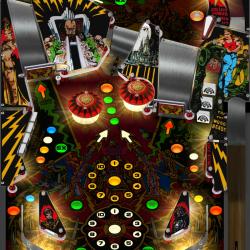 This is the last update for a while on this table, because Blackwater 100 is nearly finished, and I already started another table. So I want to close this project.

First of all: You need a DX9 version of VP, the table doesn't work under DX7.

Because I never owned any machine, more or less all resources like sounds, images, and so on were "borrowed" from already released tables. So the credits go to:

Shadowsclassic, Naboodiver, Arngrim, dboyrecords: Thanks for all the testing
Scapino: Many Sounds, lamp matrix, DIP switch routines, some very good ideas and tons of other stuff
JPSalas: Lamp routines, flash routines, some sounds
Koadic: Plunger code and images
Noah: nudging routines
mfuegemann : Sounds and sound routines
Rascal: Sounds
The table is fast... Because I lost the ball very quick each time I played the table, I changed the flipper length a little bit and adjusted the position of the posts near the outlanes.

This release is graphical soooo much better than the old FS mod I used to play before.

plays and looks very good, but there seems to be some problem with the top drop-target which is not falling down although hit several times! Anybody got an idea?!

the top droptarget hinders the ball from going back to the shooterlane and will always being permamently closed when the ball enters the playfield.

if it was so in every situation (I cannot imagine) this (stupid) drop target would be superfluous. There are much easier (and cheaper) solutions for this only function to hold back a ball from the shooterlane like a feathered gate as used in almost every pinball. Don't you think that there must be some funktion with it? As far as I remember this target could be shot down so that you are able to shoot the ball into the shooterlane what makes the bonus count and shoot the same ball again to the playfield. Maybe you'll think it over again?

When I load the table I get a black screen and mouse cursor shows up.  I hear audio but all of my screens are black.

I am running UVP, using ROM flashgdn.  Any ideas?  (the rest of my tables work fine.)

the droptarget is ROM controlled, and not controlled by program code. That means, that it 100% works as designed by the ROM code. The only thing the coding does is making a nice visual animation. If you don't belive me, please have a look at http://www.youtube.c...h?v=CV0hDo30vpg at position 34 seconds. There you can see the original behaviour of the table.

You need the DX9 version of VP to run this.

thank you for the update sindbad - looks even better. This is amongst my favourite SS tables in Vpin.

Can' get this one to load.

" Index was out of range. Must be non-negative and less than the size of the collection.

Not sure what any of that means! The B2S backglass does display and the sound comes on but no playfield image then automatically goes to the script error. Any help or insight would be appreciated, thx