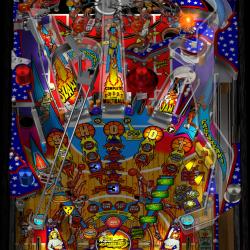 Thanks to bodydump for the new playfield.
Some of the blue plastics redraws were done by D_Struct.
And thanks to bent98 for sending me all those graphics

The table has been saved with VP916 beta (rev 577) mostly so you will be able to see the flashers in the VP916 beta. They are much much better than in VP915.
In VP915 the flashers will look with too much color. But think of this table as "test" table for the flashers in VP916.

I have added the "backdrop feature" on the apron, with just a simple player and a basketball. I guess someone will make a B2S for the FS version very soon

And this is supposed to look even better under the newest VP?

WOW!  JP, you don't just push the envelope, you drag it behind a rocket sled!

Awesome job, this table is just sensory overload for the eyes!

Holy crap!  You've just made my month!!!  Plus news of a soon-to-be B2S to boot, that makes my year!  This was one of my faves when it came to real tables and now it is the fave on my Hyperpin cab.  You just made my cabinet venture 100% worth it!  Thanks and keep up the spectacular work!

mattskoog, you pretty much summed up my thoughts exactly!

hi, very good job , but why is not possible to diseable the flasher mode in 915  , i think it's will be a good option

My DMD Is distorted with this version plus BS2.The Rol value 1 or 0 didnt fix it.I also updated to vp916 and backglass server 1.25.Whats Wrong?