maceman
View other files from this member 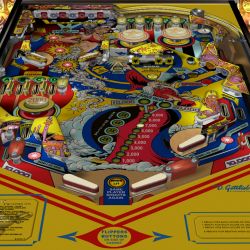 Note:
F6 to change # balls 3 or 5.
I tried to use high quality graphics where possible, so you will need to use either one of Koadic's stable daily builds or lower the max texture dimension setting in the video options if you see the "could not create texture offscreen surface" error. It will decrease visual quality so I would recommend a new build that supports higher textures to play.

This is the desktop version of Genie. It is a new table build from Franscisco's FP images (Thanx Franscisco!) and using Compufox's script with some changes.
A big thanx to everyone who help along the way,  Hmueck, BodyDump, LuvThatApex, Blur, EalaDubhSidhe, Grizz,, Bolt, Rob046 etc.... I hope i didn't miss anyone!! Thanx to Compufox, Noah, JP  and Pinuck for various scripts.
Thanx Darquayle for Genie dB2s and Destruk for the Rom.
Thanx to Forum for testing and support.

This is one hell of a fantastic reproduction. Perfectly balanced graphics and great gameplay. Hope we will see more of you in the future! Hint: What about 'tweaking' JPSalas' and rob046' already excellent "Haunted house", or reproducing "Black hole"?

WOW!  You do amazing work!  Thank you!

After playing with this new gem for a few days I found there is something strange happening at the left rollover (right from the outlane). Sometimes, the ball accellerates very quickly on that spot. I can not really reproduce it, but it happened on me 4 times on let's say 20 games. This happened with both version 1.1 and 1.2. Another thing, which only occured once (with version 1.2, so I don't know if it also was there in 1.1), is that I was presented a 4th ball. At that moment the end tune was playing and the ball counter stayed at 3. I only play 1 player games and never change any settings. Maybe this is some helpful information for a new version? Or are you too busy with Haunted House??;-)

I have been playing this table for days and now out of the blue it does not work anymore.  Says could not create surface.  What happened???

guys, I seriously don't know what else to tell you.  I've posted tables notes above, and also in the current Genie New Build thread.  If you don't want to use the newer VP builds that support this game, I guess you will continue to miss out, but like i mentioned many times, use the NEW BUILDS from Koadic. Cheers.

Thank you my son is very happy