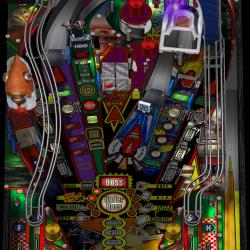 Based on the Stern table from 2005, The Sopranos.

Thanks to:
- bodydump for the playfiend and plastics
- deadrock for the real table pictures and video
- oldskoolgamer for play testing
- grizz for the flasher templates

The table is meant to be played with the newer/beta version of VP915, even if it is not officially released, it plays very well. The table could be played with VP914, since it doesn't contain many alpha ramps or primitives. But since I made the table using a newer version, so it requires VP915 rev 434 or higher. Trying to load the table with an older VP will just give you an error about a corrupted file.

Sorry, clicked on 3 stars by mistake when trying to give 5. Who should I contact to correct it.?

Thanks to all involved! Great table

THANKS a hundred times! Sopranos always was one of my favs!!

Thanks very, very much. I love your table crations, they arle all wonderful for me

:otvclap:I have a slow cpu (amd dualcore 3000Mhz and a nvidia 500Ti) and all is on: the ball and flashlights are super. I love your Tables and mods.

speech volume is very low.....tried to change it with ` on the DMD , but only affects the mechanical sounds

then tried to change it with 7,8 & 9 in the menu. Factory reset and bkground music volume, but still the speech volume is minimum.

Hopefully somebody knows how to change the speech volume, or am I the only one with this problem ??

First of all thank you for your great work.

This might be a simple fix but not for me, I'm getting this error in line 770

First of all thank you for your great work.

This might be a simple fix but not for me, I'm getting this error in line 770

Got it solved, missing some vb files. Rookie.

@Dave72 I followed the instructions here to raise the volumes ..

Hope it helps .. just don't raise the volume up to high or it will get scratchy

This raised both speech and music .. and worked for me