Onevox
View other files from this member 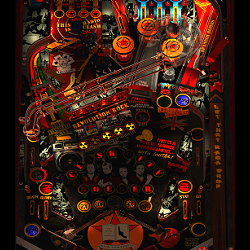 This is an update to "The Clash," released in 2018, a mod to JPSalas' Rock Encore table. This is a "heavy" mod with significant changes to game flow and play. Mods not permitted.

I wanted a game with longer game play and more 3D models to make it more visually appealing (especially for the VR crowd). I've added three pop bumpers, a kicker, and raised the center loop to a plexi and wire ramp. I've also created a new backglass. See installation and changlog notes for details on changes. I hope you enjoy.

There are a lot of people who helped me with various parts of this. All help was greatly appreciated, big and small.

This does not include the music files. Instructions are below on how to add yourself. If you added The Clash music to the previous version, this will use the same files. Securing and formatting songs yourself adds complexity I know. But it's the right thing to do. And The Clash is definitely worth it.

(Please note: Song lengths (in milliseconds) in the script  may not be accurate for your song additions. (I often edited out song beginnings if there was some chatter or slow intro). [ Song info is found on lines 430-478. Song lengths must be entered in two places, one is stop and one is start song] See below for how to calculate song lengths in milliseconds.

NOTE: Distribution of this table or its related files on a computer, virtual pinball machine or storage device, which is SOLD as part of a commercial product, or sharing this file on a public website, or via a file transfer process, is not allowed.

Add music: Buy The Clash songs you want and convert to .mp3 and rename them similar to the recommendations,  then place in your Music folder.  Determine the length in milliseconds of each song using software like Audacity; this allows for looping the song if you good enough to play through an entire song.

Very nice table and plays really great. Thanks for this.

Wow ! looks very good. thank you to the authors.