Zedixair
View other files from this member 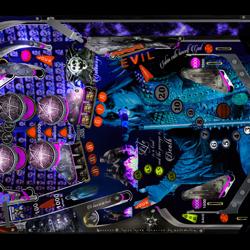 It’s time…
I can now share my modest work on a table.
And since I have to start with something not too complicated, it's a Mod of the Iron Maiden table (the band), which was itself a Firepower mod.
So of course, all the credit goes to all the previous authors and people who worked on these tables, and who accept mods. Thank you all.
Special thanks to Mussinger, who helped me doing a few things and who has been a man of good advices.

Everything started from the following sentence:
"if you want to play at a table, do not wait for someone to create it for you, but do it yourself".
Although I knew absolutely nothing about doing this, I said “OK, let’s go”, and here is the result:
the DIMMU BORGIR table.

DIMMU BORGIR is a Norwegian metal band that exists for more than 25 years, and their style is often described as Symphonic Black Metal, because they use a lot of choirs, keyboards, and symphonic or philharmonic orchestras.
The name of the band comes from a volcanic region of Iceland, Dimmuborgir (in one word), which means "dark castles", because of the ghostly forms of volcanic formations that evoke ruins.
As it’s a european band, please note that the pronounciations used in the table are at the european way (for instance, “U” is pronounced “uh”, not “you”).

Of course, it’s an "extreme" imagery, and this music is not very "mainstream", so I am aware that my work will not please many people, but I really hope there will have at least one person that will appreciate this table as much as me.

I had a lot of fun doing it, working on visuals in Photoshop, recording voices and effects, selecting songs from different albums, fixing lights and colors…
It's a lot of work, but it's very interesting.

In short, be indulgent with my first try !

In the dowloadable file, you’ll find the table, the backglass (with animated lights), the rom, the music folder, and an image wheel.

Now my favorite band has got a VPX table…

Looking forward to checking this out when I get home.  They are awesome live, so interested to see how you've captured them on the table.  Looks amazing.

Very cool, finally got a chance to play.  A Mercyful Fate table would be awesome.

I can't wait for the download to finish and play this interesting sounding table. I'm always up for anything music-wise, being a "muso" myself in the 80's and 90's. And I've learnt about a new (for me) band. Thanks, Zedixair.

Excellent Table Thanks for all the hard work.