mark1
View other files from this member 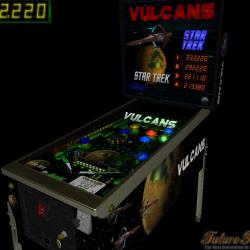 Vulcans ,
An original future pinball table,
based on Gene Roddenberry's and Paramount Pictures "Star Trek".
Table rules,
Light "Vulcans" for special at the top kicker, by hitting targets in the center roto spinner,
( special lasts for 90 seconds).
Knock down the four drop targets (on the left side) for a chance for a 5,000 point
bonus .
Lighting "Star Trek" by getting all the targets under starfleet holograms,
will get bonus and a chance for bonus multiplier to increase at top left kicker),
and chance for the green ball,
(many points are doubled for 45 seconds,(when you get the green ball)).
(also hitting the "planet vulcan" in the right roto spinner when Star Trek special is blinking, gives a 45 second
chance for 15,000 point bonus at midleft lanes, (under gold diamond hologram)).
( Lighting "SPOCK" by hitting targets on the right side roto spinner
lights a chance for a few small bonus'.
Hitting the "planet vulcan" during specials in the roto spinners gives chance for bonus at top lanes.
Replay scores on the table card.
It's A Fun table with many new holograms.
( Some very well made Midi renditions of Star Trek music were used for background music.) 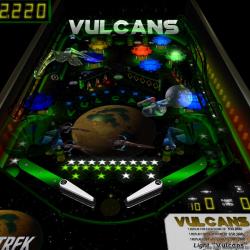