xenonph
View other files from this member 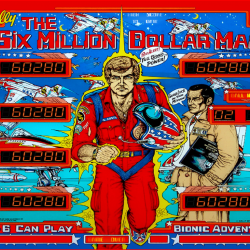 A day and night Mod of dboyrecords dB2S Backglass.
I first would like to thank dboyrecords for making his dB2S Backglass, and for encouraging mods without permission. (Big Thanks Sir!!)
All credit should be directed his way.
I re-colored the Blue and Red Border.
Added working lights.  Players 1-6, High Score To Date, and the Match light. I didn't add any other lights that blink.(The night Mod is lit up but doesn't blink.) I think I found a Game Over Light but didn't add it because I didn't see it on dboyrecords original.(Only saw the 2 lights faded on pic)
I just kept adding the next rom ID to the light until it blinked or performed at the right time. Yes it was time consuming but I learned alot. I never did find a TILT light either. Not sure of how the lights look on original.

I first made a sound mod of this table, and decided to download the backglass. I thought to myself, "I need to clean this up and try and get the lights working for this.

Hope you like it.
I plan on making a Bionic Woman Mod also. Table and dB2S backglass.


EDIT:
Just saw pic at IPDB, so I added Game over and Ball in Play lights.Had to make them yellow for the day mod. But they are red on the nightmod like in pic at IPDB. 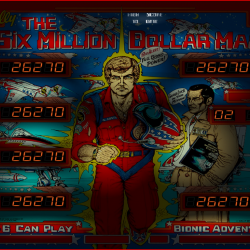 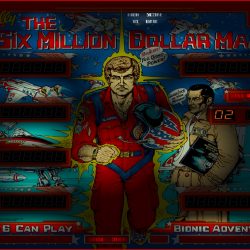 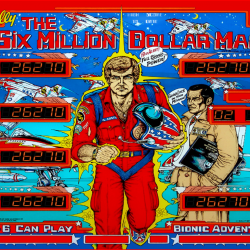