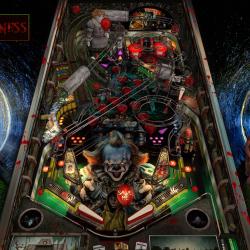 This table is an original table, with the layout inspired in the Oktoberfest table.

This is my version of the table. With my physics, and made for desktop and cabinet use.
If you want to play in VR with nFozzy flippers, Fleep sounds and a few extras then download it from vpuniverse. Many people helped on that version adding a lot of visual extras for VR, including a video with instructions. That table will also play in desktop and in a cabinet.

Both tables have the same layout, graphics, rules, sounds and music. But they may play a little differently due to the physics being tweaked differently.

The rules are easy to understand, but take a look at the manual (or the video on the other release

A big thank you to both of you for this magnificent table.

A big thank you to both of you for this magnificent table.

Oct 31 2022 07:56 AM
JP, you are genius! Thanks to you and Joe Picasso and of course to all the other geniuses that helped to make this 'nightmare' come true!

Thank you for this masterpiece.

A true masterpiece, thank you!

Spooky. Not sure if I want to play this at night! Thanks you so much for your hard work. Looks amazing.