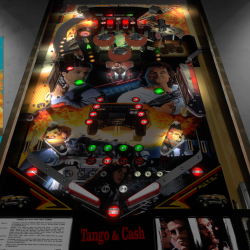 If Sylvester Stallone and Kurt Russel get together, only good things can come out of it. The creators of the film also thought so. Especially being aware that these were also action heroes already celebrated during this period. In the 80s, the formation of a cop duo on the cinema screen from here and beyond became popular.
This is what this great action film rode in 1989, and it was very good for him in this dual formation.
The film is characterized by great humor and a lot of action, and the two main characters bring in the obligatory, and sometimes even more, the role of "good cop, bad cop" is a good fit. I saw Tango and Cash when I was a teenager.
Even then, the soundtrack composed for the film was pleasantly rumbling, which throws a shovel at the already great mood of the film.
In year of 2019 will be the 30th anniversary of the film’s debut, so the makers can have a nice centenary. For my part, I made a tribute board recalling a pleasant memory of the film.

Original (my resource) table:
Barracora (Williams 1981)
Author(s): Bigus, Dids666
Thanks to Bigus for modifying the Barracora board favorably in the past. But unfortunately I tried to contact Dids666 several times but no response was received from him. If you do not contribute to this table mod in the future, I will of course delete it.

You can find the necessary rom file to start the table here (barra_l1.zip):
https://www.vpforums...ds&showfile=127

Great, good to see another release, Ivan. Your originals are cool!!! Much appreciated, thank you!!

I know this has been a long time coming, I asked you about it over a year ago. Thanks for the time you spent and for sharing it.