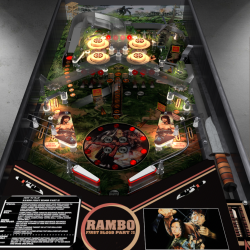 The action heroistic character of Rambo may not need to be introduced to anyone. And especially for action movie lovers. Nor could you imagine better creations than Rambo films to feed the action film genre.
Important to mention should be made of the film’s soundtrack, which were composed by Jerry Goldsmith. Not only does it set the mood, but the fantastic music can be said to carry the film on their backs.
However, of course, Sylvester Stallone is not out of the role of action hero for a minute.
Although Rambo has already received a pinball version as a re-theme for the 1986 Raven Gottlieb/Premier table, but I also wanted to make a completely authentic version that is true to the original music, sound effects, visual world.

Differences from the existing version:

But I would leave the helicopter and the Rambo knife because it would be very cool to use for my version as well.

And finally... As a Hungarian person, I am especially proud that the world-famous producer Andy Vajna (Andrew G. Vajna) also took part in the film's box office and to become a blockbuster.

We will preserve your memory forever. Rest in peace!


Video of the gameplay:
https://youtu.be/kiUgVGlASqw

Important note: the contents of the music library (mp3 files) are placed in the following folder: Visual Pinball\Music
So, a complete multimedia package is included with the compressed file. Among others, the backglass (directb2s) file. PinballX desktop and cabinet files (audio, pictures, flyers, instruction cards, wheel, etc.)

In keeping with Gottlieb's request, on this page you will not find the rom file (ravena.zip) needed to start the game, but the internet will help someone who is not available yet. Google will be a good friend...

Good job buddy.  Normally I do not like rethemes but since its the same theme and the next version of the movie I had to try it.  Love all Rambo movies

Rambo 2. Best Stallone film ever(yes everybody says the First better but for me not). Thank you so much! I glad you use Tom's table for mod with the amazing helicopter model.

One amazing piece for the collection my friend! 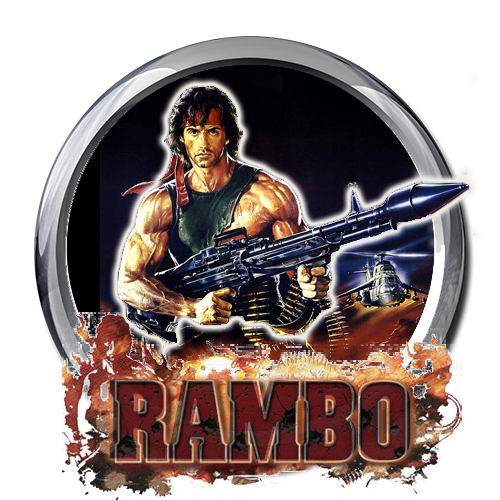 Apr 23 2020 05:53 AM
I share with my 30 min gameplay (honestly the first games are terrible, after 20 min I am already starting to get familiar with the table).
Great re-themed table, amazing music and sound. nice work man!
Gameplay:

Thanks for sharing your video. In addition to my morning coffee, I will be watching this gameplay video all the way

I'm glad you like the re-themed board. Best regards

I share with my 30 min gameplay (honestly the first games are terrible, after 20 min I am already starting to get familiar with the table).
Great re-themed table, amazing music and sound. nice work man!
Gameplay:

Nice Table Thanks for the Hard work that went into it.

where do i get the rom to play this?