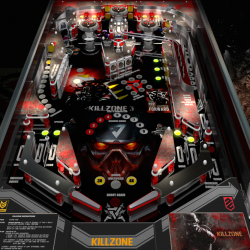 With the release of Killzone in 2004, the Playstation 2 has become one of the most prominent creations. Over the past 15 years, its popularity has still not decreased.
Thanks to great music and fantastic atmosphere. It's definitely a must-have for FPS fans.
The second part was released in 2009 and the third part of the trilogy was released in 2011 for Playstation 3. In fact, the first part was also released to the console in HD resolution.
The new generation also received its Killzone, which received the Shadow Fall subtitle.
Though the game unveiled the power of the Playstation 4, which debuted in 2013, but in addition to sight, the game couldn't impress the fans.

But, going back to the classic three parts, well, I made a pinball version of it because of the beautiful memories of the past...

Video of the gameplay:

You can find the necessary rom file to start the table here (freefall.zip):
https://www.vpforums...ds&showfile=749

Original (my resource) table: Freefall 1.1
Author(s): Jpsalas
Thank you very much to the master (Jpsalas) for allowing me to modify, re-theme his beautiful works.

Love all your tables...great imagination, graphics and audio!!

Hello Flash Table Lover! Thanks for the feedback. I'm glad you like this board too!

Love all your tables...great imagination, graphics and audio!!

Wow this table is amazing. And the music really gives a very intense feeling to the gameplay. Amazing work!

Would be nice to have improved score display in desktop mode. Again thanks for such a great creation.

I really appreciate your tables with a complete package. They always rock guy...

Thank you very much for this table. Very original and the sounds are well done on this one.