hauntfreaks
View other files from this member 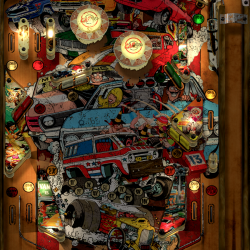 yeah , yeah,... I know it's a long time comin' was it all worth it?... only you guys can decide if this has some real passion behind it. My whole life I have loved this type of art. CARtoons was a car comic book, it basically was the more family friendly version of Ed "Big Daddy" Roth's monster art cars and rat fink. It featured artists like George Trosley, Dave "Big" Deal, Shawn Kerri, Steve Austin, just a few of my favourites.

During some posts about the Rat Fink table... SliderPoint (mike) and I spoke about the old magazine and was told it had been re-released... in celebration of this, and having LOTs of art from the mag, I decided to throw something together. This idea snowballed into a desire to build an "aged" look table... I always loved BorgDog's (Dan) Gemini table, it being a "real" distressed playfield... so I used the components of Gemini as a start for the table, thinking it would be a quick throw together table since it was scripted(eye roll).

I had gotten ahead of myself building and ageing the playfield. I say this because I aged it way too soon... this was not a fun task and I wasn't willing to redo it...but that's a whole other story....

Now that the scene was set, I have an aged PF and now I needed to figure out how I could age the plastics and 3D modelled parts and wire guides. After a bit of playing around, it was all figured out, now for the rubbers. I tried many colors, materials and textures, nothing was working... Mike sent me a texture and god damn it looked awesome. It's one of my fav things in the table (thanks Mike).... Mike also added some lighting effects, like a light with a bad ground and power draw from the power supply... it really came out great...

I had an idea for a special effect back when this table was started. Our awesome VP Devs had added an animation feature and I really wanted to use this table as a showcase for the great features given to us by the devs. I don't want to give away the name of this effect just yet, you guys will see it soon enough. Anyway, I needed a 3D model for this and it was pretty easy to find one. I made a texture for it, and it was done.... yeah right, now it needed to animate. I had no clue how I was going to do this... I first talked to Randr and Dark... both took the time from other projects to throw in their talents so we were getting there. Next it needed to be sent to our VP devs Toxie and Fuzzel, voilà! The animation worked, now it needed to move and react within the table... I asked Dan, "so can it be done?" I believe his answer was something like , "I'm sure it could but wont be easy." So I asked "how about just a little?" He messed with it for a few days and sure as shit, it moved ... but could it do more??

This is the part of the story where I flake out and need to give VP a rest for a while and take care of real life... Fast forward 8-9 months... I return to the scene. While I was gone, Dan and Mike had turned what I thought was an over ambitious dream into reality. Now we're back to me being too quick in ageing the PF , I had never added the scoring to the PF... and I was not redoing the PF. Fast forward another 4 months or so... its time to put this thing to rest. I decided to add the scoring to the inserts... more ageing to all the other crap it needed and my part was complete....

Back to the "special effect," I think only Dan and Mike can explain this and I will have them explain in more detail.. again you guys will really enjoy this. Well at least Dan and Mike, and I think you will... I love it!! sorry again this lingered so long, I take 100% responsibility 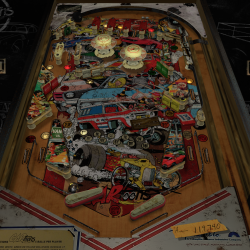 this is a great and fun table, thanks!

Thank you all for this masterpiece!!

Thanks for a great table!

You'll never stop to amaze me... Thanks buddy

Thank you so much for this fine original table.

Very original and worth the wait.

Congratulations and thanks to all!

Thanks for all your work on this!