kalavera
View other files from this member 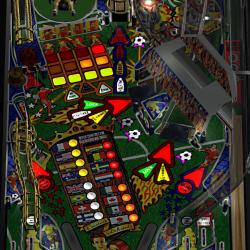 JPSalas for his huge help with the goalkeeper, without him he wouldn't cut a ball thanks!

32assassins for the 3D modeling of the ramps and for debugging the code.

This table is one of my favorites, the first stern design after acquiring the division of sega pinballs and it is believed that this design was inherited from that company. the version that had been quite old and with graphics in low resolution, the playfield recreates it by parts, since I could not find a good quality photo to do it, the script is the same as the one that had the Sliderpoint and Xenonph table, with some small changes, like the lights.
I hope you like it.

Thanks for the update - great table!

thanks for the table. a little bug : the auto kick launcher didn't work (the ball stay in the launch line when multiball and you need to launch it manually)

Thanks for all your hard work!

I love this table.  Thank you so much for making it.  I've noticed that when the ball goes into the kicker hole below the upper flipper (below the goalie), the kick out does not seem strong enough and it get's stuck.  Looking at the script, I could not find the strength number for this kicker.  Am I missing it or any other suggestions?  Thank you in advance.