loserman76
View other files from this member 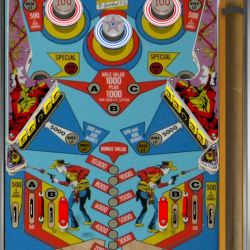 '*
'*        Gottlieb's Fast Draw (1975)
'*        Table build/scripted by Loserman!
'*
'*  Thanks to the following for their contributions (whether they know it or not!)
'*  If I have missed anyone, let me know as this table would not exist without the
'*  folks in the community.
'*
'*  Images used for this table were culled from IPDB, Pinside, and various other websites only
'*
'*
'*  JPSalas - gameroom backdrop and methods gleaned from his fantastic tables
'*  EalaDubhSidhe - table object templates
'*  Black - HS save/load routines
'*  Itchigo - table templates which gave me ideas on how to accomplish what I wanted in this table
'*  CONRAM - various code ideas learned by tracing through code on his tables
'*  akiles50000 - for that totally awesome tutorial on table building. So much stuff I now understand because of the work put into this tutorial
'*  Inkochnito - scorecards/instruction cards
'*  Pinuck - Gottlieb chimes and score motor routines
'*  Herweh - directB2S designer and tools
'*  JimmyFingers - rolling ball and other objects' sound routines
'*  Bodydump - for his assistance on various tables that got me using primitives and his lights
'*  UncleWilly - for his primitive templates
'*
'*
'*  Of course, the team behind Visual Pinball - without them, there wouldn't be much choice for playing pinball on a PC
'*  I also must include Black and his Future Pinball as I used tables on that platform to help in building my VP tables.
'*
You can enable dB2S by downloading my backglass file and modifying the script line that reads "B2SOn=false" to "B2SOn=True" (without the quotes of course)
To adjust Balls Per Game and Replay settings, hit '[' then '6' toggles 3 or 5 balls, and 7 moves through the replay settings (pay attention to the insert cards). When you have set them the way you like, hit '[' to exit settings.

NOTE: This table (like all of my recent releases) requires VP9.9x as it contains primitives

Considering there is already a Fast Draw table out there, I had to try this to see if it is graphically better and has any mod features that make it more fun to play.   The answer to these two questions was "no" even though I appreciate the amount of work that goes into these tables.   There is already another VP table produced that looks better and is modded to have fun action sounds and music even though this makes it not like the original.