remdwaas1986
View other files from this member 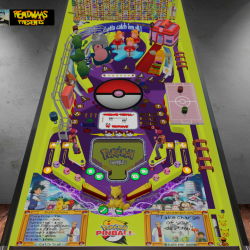 I choose you Pikachu!

First my thanks to JP! thanks for letting me use your ramp from zelda, pikachu, eggs, some sounds and the pokemonballs. Also thanks again for helping troubleshooting the table and helping with some of the code.(when finished i had 11 issues) I'm so happy that JP always willing to help me, if i'm stuck. I really love his Pokémon table!

This is an original table, with everything included in the vpx file, and it doesn't need any external program to run. It can be run in desktop mode and in FS mode. The DMD will rotate accordingly.
It was 1999 and Pokémon came out for the Gameboy with all the nostalgic sounds! I remember playing while i was 13 years old and i thought that my accu was broken because a Pokémon was poisoned and the screen did weird. Next year i had Pokémon yellow and for the first time Pokémon pinball(2000).

This table is based on pokemon pinball(gameboy pokedex graphics)/ pokemon pinball ruby/ Pokémon Red en Blue(Gameboy) as well the first season of Pokémon the anime series. I made the playfield almost the same as Pokémon pinball ruby, but i use the pokecenter instead of a pokemarkt.(i don't have a flying bird or egg's that hatch) I only focus on the first 151 Pokémon's because that remembers me of my childhood.

You are ash and start in pallet town, you have to catch Pokémon's, do battles and win gym badges, just like the original Pokémon games.

The features of this table.Play tip: if the ball comes from the right upper lane just leave your flippers and don't try to hit the ball, 9 from the 10 times it will come on the edge of your left flipper!

This pin cost me 6 weeks to build. Please leave a reply(so much appreciated) and rank the table! I will be busy the most of this year with my study and have to put  my other projects on hold. Maybe later i will post another pinball project.

I hope you like it and how many Pokémon do you catch?

Like my other tables i have a normal table and flex table.

This is a really nice design, congrats!

Thanks for your work! Another great looking table

Super cool! My son is going to love this. Nice work

Nice work!!! This was my favourite game on the game boy

great work! this is one of my new favorites!!!