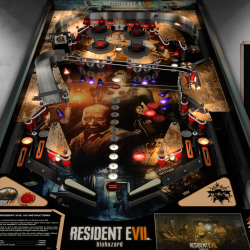 Resident Evil has a 23 year history. When the first episode was released in 1996, it immediately hit the hearts of horror fans. It was followed by several parts, and after successful sales, it was made into several movie films.
Although there was nothing to lose in the quality of the game series until Episode 4, the rest of the sequel was just a shadow of its former self.
Many parts have been made, sequels, or just a side episodes, but horror fanatics are no longer served by action-oriented sequels.
In 2017, however, the series returned to its coveted roots and brought back the darkest panties of horror, now in FPS rather than TPS, thanks to further enhance its insight...

Video of the gameplay:
https://youtu.be/xozl5KklOzg

An important thing: the content of the music library -mp3 files- are placed in the following folder: Visual Pinball\Music

Original (my resource) table:
Fire Action De Luxe v1.0.1
Author(s): Jpsalas
Thank you very much to JPSalas for allowing me to modify, re-theme his superb tables!

You can find the necessary rom file to start the table here (fireactd.zip):
https://www.vpforums...ds&showfile=584

"The emulation of the Taito tables is a little different than other tables, and if you quit the table in the middle of a game, next time you restart the table it will continue that game.
And if you had some locked balls it may be possible that you wont get a new ball, to fix that you need to delete the nvram file (if available) from the NVRAM folder. I haven't found any other solution."

You are on a roll. Love your games! Thanks for sharing!

Hello Heinz! Thanks for the feedback!

You are on a roll. Love your games! Thanks for sharing!

Thanks for that little snippet of info about deleting the nvram. Al;ways handy to know these things. Yet to play the table, but you never disappoint.

Another IvanTBA Original...... Thank You Thanks again for the cool wheels! I was really scared from the first one

Another IvanTBA Original...... Thank You