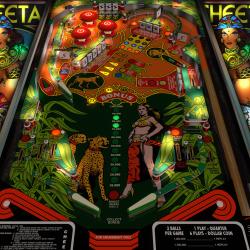 Based on the Stern table from 1980.
Thanks to StrangeLeo and Kalavera for the pictures of the real table.
Light numbers taken from Destruk/Lander table as they are not described in the manual. I also added the backdrop lights.
I have redrawn the playfield & the plastics, but I kept the animals and girls from the real table.

I have changed the default rom to use the cheetah2, which allows you the bonus shot just once per ball. The original rom had a flaw where the bonus shot (left lane) kept lit after collecting the bonus, so you could hit the lane again and again and collect the bonus again. So that made the game not so fun anymore

And if you are in the mood you can change the rom to cheetah1 which will let you collect the bonus at the left lane just once per game.

You may change the rom in the script: 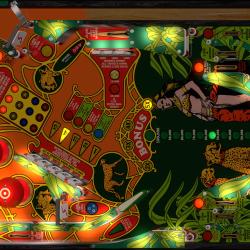 i never was the first Downloader, until now

and thanks JP, Leo and Kalavera

I never was the 17th downloader!

woooow its marvelous!! thanks JP!!! every time less is needed to finish all the 80s!

Thanks JP, StrangeLeo and Kalavera for this classic 80s pinball, amazing again.

WoW!! Thanks for sharing. Thanks also to everyone involved like StrangeLeo and Kalavera.

Although i think these would suit a spce theme better.

However, Cheetah a wild pussy, worth 5 stars for sure.

Another great rendering by a true artist! The magic continues. Thanks JP!